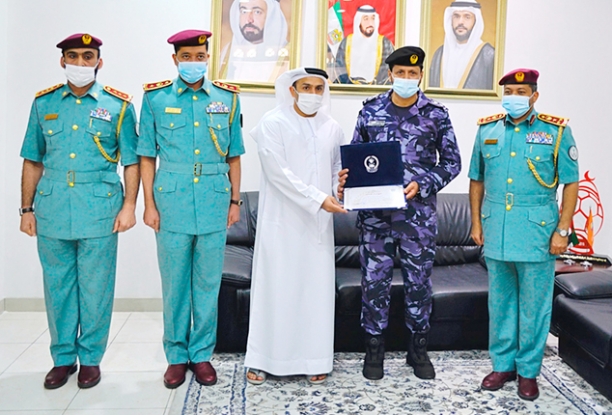 Major General Saif Al Zari Al Shamsi, Commander-in-Chief of Sharjah Police, honoured Tariq Abdul Rahman Al Saleh, Executive Director of the Sharjah Driving Institute, in recognition of his efforts and constructive positive contribution to and fruitful cooperation with the Traffic Services and Licensing Centre in the field of traffic safety and driver licensing.
Brigadier Dr. Ahmed Saeed Al Naour, Director General of Central Operations, and Lt. Col. Khaled Mohammed Al Kay, Director of the Vehicles and Drivers Licensing Department, were present at the honouring ceremony.
The Sharjah Police Commander-in-Chief commended the positive contributions of Al Saleh, which serve the police and security work, and support the efforts of the Sharjah Police, in the areas of training, service, and customers’ happiness, which reflect its role in making roads safer, and achieving the highest levels of traffic safety for all road users. He praised the tireless efforts of the Sharjah Driving Institute, and its support for partnership and cooperation that contribute to advancing the development of the UAE in general and the Emirate of Sharjah in particular.
For his part, the Executive Director of the Sharjah Driving Institute thanked the Commander in Chief of Sharjah Police for his unlimited support to the Institute, expressing his happiness with this honour.